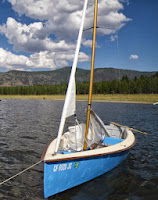 Like all love affairs, there have been cycles ranging from "smokin'", to "taken for granted"; periods where you can't get enough, to periods where you forget the need to maintain and nourish. And so it has been with Sharlet. Sharlet is a sailboat. A 15-foot, sloop rigged daggerboard Windmill Class racing sailboat who has been part of our family for many decades. She is equally adept at providing a pleasant day sail for a couple of adults, or the skipper and two or three children in gentle breezes, as she is at providing a thrilling ride skipping across the wave tops on a reach while you hang on wide-eyed at the ragged edge of control.

For over a decade it was all about racing, at least one weekend a month during the season. Over those years we gradually learned how to skipper and crew in the relentless, wave-curling blasts of the Nevada desert wind that Mark Twain called the "Washoe Zepher". By the time we had things figured out, in the late 1970's, and managed to snag the Windmill District Championship cup for two years in a row, the popularity  of sailing, especially monohulls, was in decline.

And then in 2007 sailing activity perked up, thanks to expert Windmill sailors Scott Rovanperra and Dave Nielsen. They coaxed me and Sharlet out of retirement and back to the starting line.

It took only a few races to reveal that both the sails and the skipper were a bit blown out. Not only that, but those pounding planing reaches across Eagle Lake had opened up cracks in the hull.

Now, during the last few days of summer, 2013, I'm inspired with another burst of enthusiastic maintenance energy, this time aimed at the rudder, tiller, and daggerboard. Was it inspired by Darrel, who continues to carry the Windmill flag, building new boats, restoring old warriors, and engaging new sailors? Or realizing that the thought of replacing Sharlet with a slower, more comfortable craft were akin to selling a family member? Or the excitement of watching the non-boats of the America's Cup duke it out? No matter. I'll cling on to the tail of this horse named Enthusiasm and hopefully hang on until these pieces of wood are as solidly gleaming as Sharlet's hull.