That title sounds like one of those little amateur photography pamphlets Kodak published in the 1950's. By the time I was 15 I had acquired several of the pamphlets, as well as my Dad's Argus C-3. In 1956 my folks were outfitting us for a three-month, cross-country trip in our travel trailer. For that trip, in addition to the camera and a couple dozen rolls of Kodachrome, I had received a pair of clip-on, polarizing sunglasses. To me they were magical, the way the sky darkened and lightened, and colors became richer as I tilted my head this way and that as we headed east through the pines of the Sierra Nevada on Highway 40 over Donner Pass. 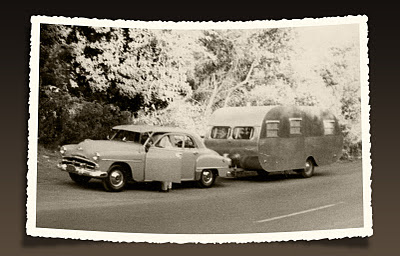 From those Kodak pamphlets I learned the exposures to use for night scenes of the Jefferson and Lincoln memorials. I also learned that a polarizing filter can be used to darken the sky, or to reduce reflections from most surfaces.

The polarizing filter is still a magical tool, one of the few filters I still use. Digital photography has other ways of obtaining the effects once provided by the colored filters used for black and white photography, and the color correcting filters used with color slide film. But a polarizer is still always with me when I am photographing, since it can produce effects that no in-camera-processing or post-processing can achieve.

Polarized light is magical. Bees even use it to navigate, according to what I read. Normally light waves vibrate in all directions. But some of the blue light from the sky vibrates in only one direction - it has become polarized as it has reflected off of particles in the atmosphere. Or something like that. Light also becomes polarized when it reflects from a non-metallic surface. Why not from a metallic surface? I really don't know. But photographers can use this phenomena to bend light to their will.

A polarizer can prevent polarized light from reaching the sensor. Thus polarized skylight darkens to become a deeper blue, and glare from surfaces is pretty much eliminated. The glare reduction thing is pretty useful when photographing foliage in sunlight. Leaves look a richer green, and the color of flowers is deepened. In addition to darkening blue skies and cutting glare, polarizers can also reduce the effect of distant haze.

The glare-reducing effect can be striking in the fall. Here's a photo of the two maples that have grown to frame our garden gate. The sun is coming toward the camera from the left, and there is a lot of glare from the leaves: 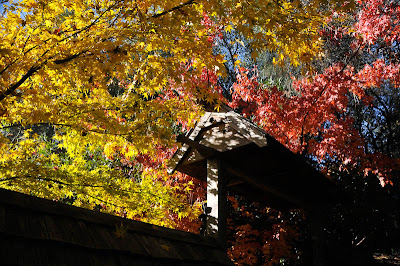 In the photo below I've added a polarizing filter, and rotated it until the color from the leaves appeared richest. 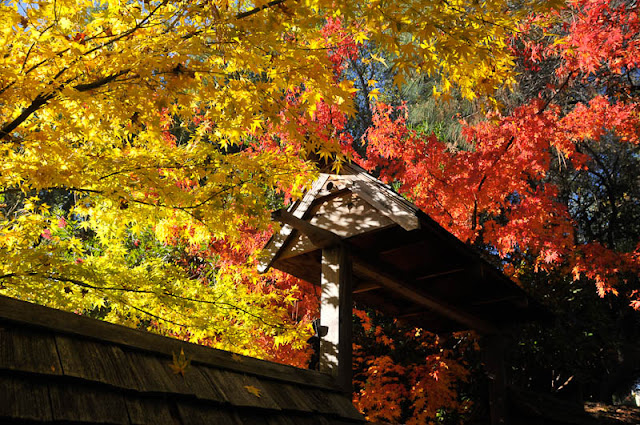 In addition to the deeper color of the leaves, the sky has also become darker. And there is another useful effect which is a bit more subtle. Notice that there is a bit more detail in the fence.If desired, there is enough detail there now that it could be enhanced a bit by post-processing. (Both of these photos are JPEGS straight out of my Nikon D300.) The reason for the increased shadow detail is that by cutting glare, the highlights in the scene have been darkened, and the overall contrast has been reduced, allowing an exposure that provides just a bit more light from those shadows.

If you don't have a polarizer, then get one. I use them even on point-and-shoots that don't mount filters by holding it in front of the lens, after first noting the orientation that gives the best effect. So get one and play with it. I'll bet you will have as much fun as I did with those clip-on sunglasses.

Some links for more reading about polarizers and polarized light: 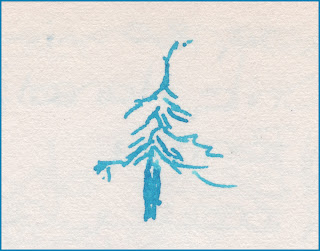 Once upon a time - well, actually about the third week of December in 2001 - Grandma and Grandpa were talking about Christmas, and Grandma said to Grandpa, "When shall we get a Christmas tree?" Here it was just a few days before Christmas, and there was no Christmas tree in their house. "Let's go down to the Christmas tree farm on Saturday morning and cut one," suggested Grandpa. "Do you think we should wait that long?" asked Grandma. They decided that even though it would be just a couple of days until Christmas, that would be OK, since the Christmas tree farm had the nicest, freshest, Christmas trees. But Grandma asked Grandpa if the weather would be OK. The weather had been getting ready for Christmas, too, you see. Some days were sunny and cool, but other days were windy, cloudy, and rainy. A day like that would not be good for walking through the forest of trees at the Christmas tree farm, looking for just the right tree to cut and take home. Grandpa thought about lying on his belly under a tree, with cold water dripping on the back of his neck while trying to push the saw back and forth. Grandpa said to Grandma, "I think the weather will be OK on Saturday".

But when Grandma and Grandpa got out of bed on Saturday morning the weather was not OK. It was dark, stormy, and rainy. Grandma said, "I need to go shop for more presents for our Grandchildren." Grandpa, who had been having trouble walking through their little house for the last few days because of all the presents already purchased for Grandchildren, just said, "OK, I'll take care of the tree".

So Grandma got into her car to drive the twisty road through the canyon and across the river to town to find more presents for grandchildren. Grandpa got into his pickup to drive the short distance to the Christmas tree farm. Even though it was raining he was OK with going to the Christmas tree farm, because they might have hot apple cider there, and besides, he got the best deal anyway because he didn't have to drive the twisty wet road to town where there would be lots of other people driving around trying to buy presents for Grandchildren. He even remembered that Grandma had reminded him to find a Christmas tree that was not too big - it should be just the right size. But when Grandpa got to the Christmas tree farm the gate was closed. And there in the rain was a sign, painted with a pink spray can, that said, "CLOSED FOR THE SEASON". 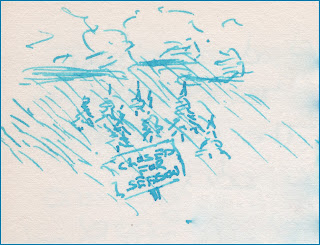 So Grandpa thought, "OK, I'll just drive a few miles up the road to the lumberyard. They will have Christmas trees for sale there that have already been cut, and I won't have to drive through the canyon to town where so many people are driving around looking or presents for Grandchildren. But at the lumberyard all of the Christmas trees had already been sold. So Grandpa thought, "OK, I'll just keep driving the few more miles to Georgetown. I'm already halfway there, and even though it is a small town, they will still have Christmas trees, and besides there won't be lots of people driving around looking for presents.

So Grandpa drove his pickup through the rain and the forest to Georgetown. The little town was all ready for Christmas. There were bright bows and garlands on the porch railings in front of all the fine old buildings. There was even a huge Christmas tree with lights set up right in the middle of the town's main street. But there were no Christmas trees for sale, because everyone in Georgetown had already cut their trees in the forest, taken them home, and decorated them.

So Grandpa drove back down through the forest in the rain. He drove past the lumberyard where all the Christmas trees had already been sold. He thought, "Fine, now I will have to drive the twisty road through the canyon to the big store in town where everyone is driving around looking for presents for Grandchildren."

Inside the big store Grandpa walked through the aisles crowded with shoppers.  In the garden center Grandpa finally found a few left over Christmas trees. He smiled, thinking he would find a tree just the right size to finally take home and then he could have lunch and a nap. But the smile went away when he saw that the trees were locked inside a cage-like enclosure, and were not for sale. A saleslady told Grandpa that was because everyone already had their trees, and Grandpa should have shopped sooner. But maybe, she said, the trees would be put out in front of the store marked down for late shoppers.

Grandpa was walking sadly through the store, thinking he would not want to come back later, when he saw Grandma among the crowd of shoppers. He could tell it was Grandma because she was pushing three or four big red shopping carts full of presents for Grandchildren. Grandpa told her the sad story of the failed Christmas tree hunt. They talked about what to do, and decided maybe they didn't even need a Christmas tree this year. No one was coming to their house, since they were going to Reno to see their Grandchildren. Then Grandpa wouldn't have to carry the big boxes of christmas tree stuff up and down the stairs, and besides, he had just finished putting all the stuff away from last Christmas a few weeks ago, and why should they be slaves to tradition anyhow.

So they both drove home in the rain over the twisty road, put their toes up, and rested their eyes for a while in front of the cozy fire, and thought they had put the matter of a Christmas tree to rest also. But later on, when the day was turning into evening, Grandpa realized he was feeling a little bit down. And Grandpa looked at Grandma, and saw that she wasn't all that happy either. They talked about what was wrong - why shouldn't they be happy, since they knew they would soon enjoy being with their Grandchildren. That's when they realized that they needed to have a Christmas tree. Maybe the people at the big store had taken the trees from the locked cage and set them outside for sale. Would any be left? 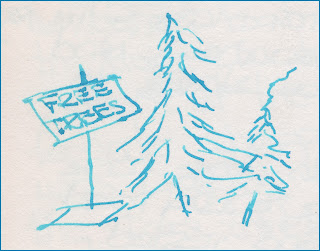 Grandma and Grandpa got their coats and drove back in the dark through the canyon on the twisty road to town. And there, in the shadows in front of locked doors of the Garden Center of the big store, Grandma spotted two Christmas trees, and a sign that read, "FREE TREES". One of the trees was just the right size. The other was very small, and had a kind of funny shape. Grandma and Grandpa were pleased to have finally found a Christmas tree that was just the right size, and were getting ready to take it home, and leave the funny little tree for someone else. But then they thought, "Would any,one else want the little tree, or would it be left there alone in the rain and the dark?" Just then a puff of wind came around the corner looking for something to do and knocked the "FREE TREES" sign over - SPLAT! - right on its face.

Grandma and Grandpa looked at each other, smiled, and put the little Christmas tree into the truck and took it home along with the one that was just the right size. Both trees were decorated with lights and ornaments and strings of popcorn and cranberrries, but the little Christmas tree was set in the place of honor on top of the trunk in front of the big window. And Grandma and Grandpa put their toes up in front of the cozy fire, while the rain splashed outside on the windows, and smiled some more. 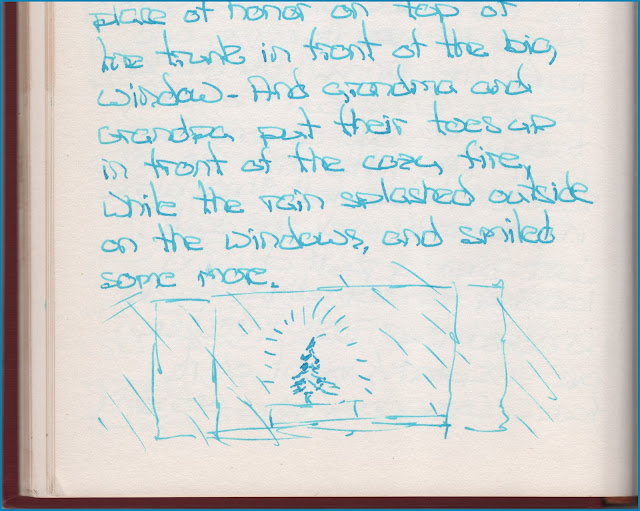 Posted by TonysVision at 9:49 PM No comments: