A sweet warm rain brought out that neat smell of wet pavement as I picked up some ribs at the local grocery this evening. Back home in the garden my little Canon G12 did what I asked to help express a bit of how it felt. It ain't the quickest camera in the closet, but I think the only one with both macro and gentle enough flash to capture this image. 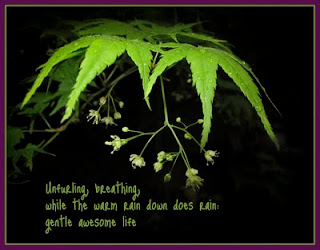 Sometimes the only thing that will do the job is the big, fast, DSLR with its range of lenses. But more and more, I'm finding that a high-end little camera, in my case the Canon G9 and lately the G12, does the job of the "diary" shots, as well as the occasional artful image. Because its handy and ready to go, images happen that would not otherwise.
Posted by TonysVision at 9:32 PM No comments: 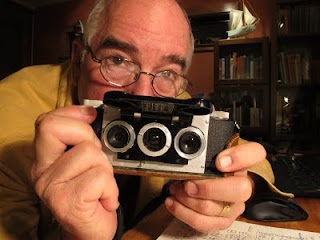 Here I am with an old camera crammed against my face again. Except this one, instead of squashing my nose, gets plastered against my forehead when in shooting position, the viewfinder being near the bottom of the camera instead of the conventional location on top. And that's not all that is different about this 1940's camera. As you can see, there are three lenses staring out of the front. The middle one is the other end of the viewfinder. The other two are what put the pair of images on the film. A pair? Yep. When those images are viewed together, the slightly different perspective produced by each is merged by the brain to produce a three-dimensional effect. We've all seen 3D - whether one's first experience was the movie Avatar, or perhaps a few decades earlier when you picked up a Viewmaster for the first time, it is a "Wow!" experience.

Somewhere along the line I've acquired a vintage stereoscope, a viewer for 3-1/2-inch by 7-inch stereo cards, and a couple of boxes of stereocards, or stereograms. The cards were made by the Underwood and underwood and Keystone View photography companies in the late 1800's and early 1900's, and show postcard views of landmarks and landscapes, as well as interesting views of agricultural and industrial activities, including silk spinning, hide tanning, plantation farming, and mining. These, as well as a big collection of Viewmaster reels, are a delight to view for their vintage and historical charm and interest, as well as the stereo depth.

I've fiddled with stereo photography from early on, with a single camera mounted on a homemade slide. Using a tripod, two photos were taken, using the slide to keep the camera parallel and to precisely measure the lateral distance between the shots. Somewhere i had read that the separation between the two camera positions should be 1/40 of the distance to the subject, so I made a scale on the oak slide rail i'd constructed in my grandfather's workshop. Later on I mounted two 35 mm cameras - Nikkormats - on a platform and managed to construct a cable release adapter I am still quite proud of that would fire both shutters simultaneously. The resulting pairs of images I processed and printed in my darkroom, and mounted on cardboard or mattboard to view with a stereoscope.

These periodic episodes were short-lasting, and in retrospect it seems I was most interested in solving a problem, and construction the equipment needed for the solution, than in actually carrying out any long term stereo photo project. But some fine shots did result. The early ones show views of the town of Novato, California, as it looked in the 1950's. Later my efforts resulted in some fun snapshots of my family in the late 1960's and early 1970's. But in the end the photographic tools I had then were too cumbersome and fiddly to sustain enthusiasm for long.

Ha - so what now - here I have a cumbersone and fiddly stereo camera, the Stereo Realist, this one probably manufactured in the late 1940's Fiddly? Well, here is how the process goes for taking a photograph.. Compare to your current nifty digital point-and-shoot:

It is quite a trip to use. Wind the film with one of the knobs, after first pressing the release button. Cock the shutter with that lever under the center (viewfinder) lens, set the shutter speed (1 sec to 1/300 sec) with the dial around the center lens (no built-in exposure meter, so I use the "sunny 16" rule, and it's various corollaries or one of my collection of vintage meters), set the synchronized aperture (max f3.5) with the dial around the lens on the left, focus using the split-image rangefinder by turning the knob on the hidden under my right index finger. (it works, but it is best to simply use a small aperture and the hyperfocal distance scale handily printed under the flip-up lens cover), then frame thru the viewfinder, the window of which is on the bottom of the back of the camera, so you press the camera against your forehead to steady it. Snap the shutter.
Here is a sample stereo card made with images photographed with the camera: 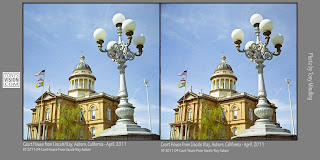 There is an opportunity with this camera is to produce some stereo cards showing local landmarks and scenes, and while emulating the photographic style of the vintage cards, at the same time provide a record of what common scenes in our local towns, cities, parks, etc., look at this time. We'll see.
Posted by TonysVision at 11:37 PM No comments: