It was a gray morning after weeks of bright sun. Any salt crust on the kayak left over from the Elkhorn Slough paddle was being rinsed off by the steady drizzle - there would be no playing in the water today. I took my oatmeal to that magical 55-inch window and pulled up a Netflix video, "Forests" to fill some quiet moments while planning what I expected would be a totally indoor day.

Enthralled by lovingly-photographed scenes of our northwest coast and woods, I was jarred by the appearance, in bright white bold font, of the words

I admit to being a bit annoyed at first, thinking, "How can I turn this off?!". But soon once again reminded myself of how precious our senses are, and how we take them for granted, etc.

How to best relate to those who have lost those gifts? Empathy is impossible, certainly not with pity. Perhaps simply by being aware of the preciousness of those gifts, and making best use of them. So ...

Minutes later during a lull in the sprinkle I leashed up the dogs and we headed out on a long walk with ears tuned not only for [BIRDS CHIRPING], but also [WIND RUSTLING] and [WATER GURGLING].

Of course the lull didn't last long, we got well dampened, so at home the doggies got well dried after kitchen-sink baths, and we all snuggled into the recliner in front of the wood stove for a bit of quiet time filled only with

Singing the Songs of Pete Seeger

Even with buzzing strings and lost chords, the finest way to celebrate and honor this man is to sing his songs. The songbook pictured is the second we have owned - the first has fallen to pieces from much joyful use. 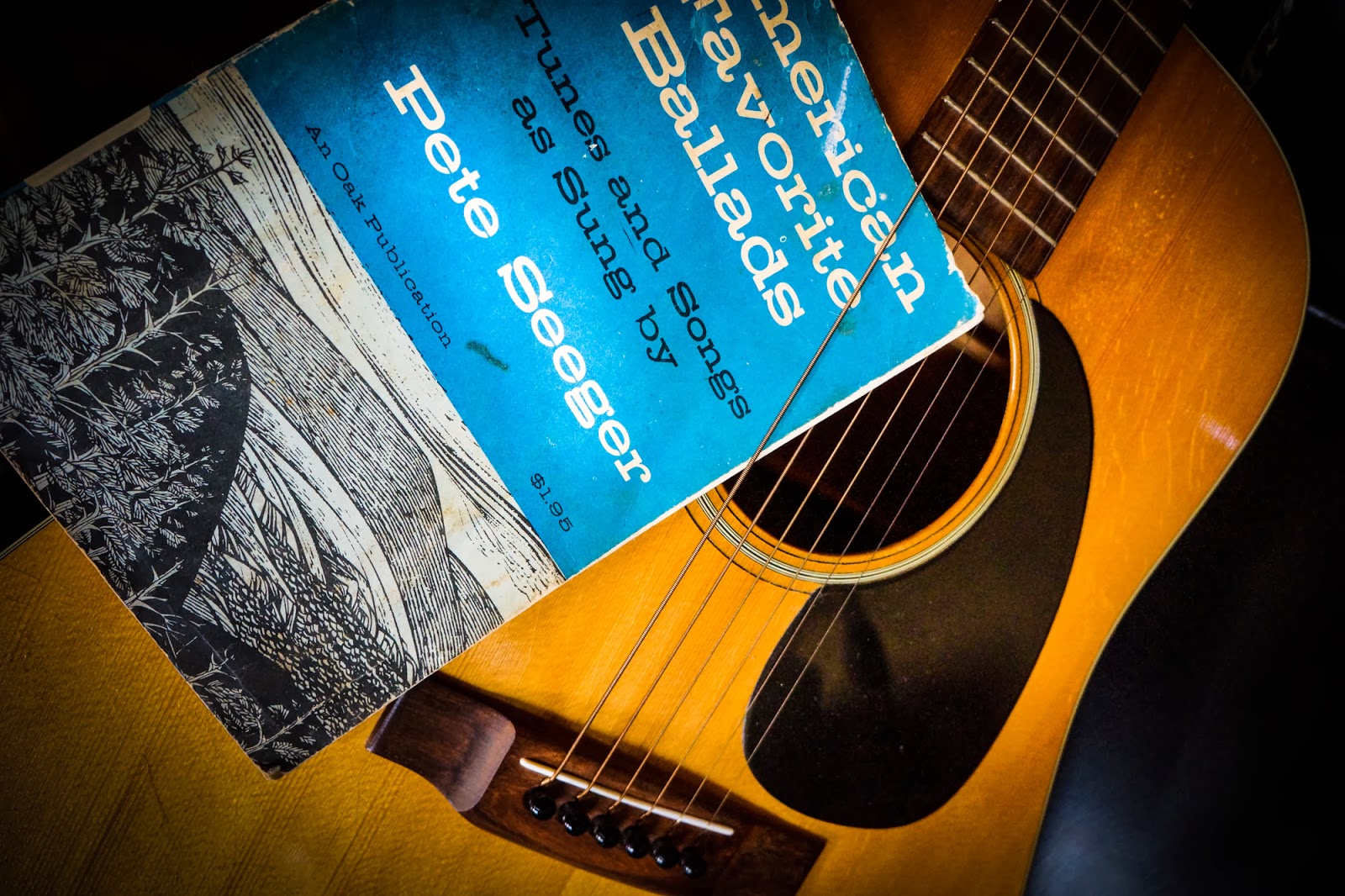 Two weekends of paddling adventures on Elkhorn Slough and Lake Clementine have provided a needed break and made good use of our lovely weather here in Northern California. Normally January days would be gray, cool, and drizzly - time for inside work, reading and workshop projects. But while the eastern US is snowy and frozen, California is in a declared drought. We could ring our hands and fret about water shortages and wildfires this summer, but meanwhile, let's go places and play.

Elkhorn Slough, January 18-19, 2013
So last weekend I got up at 3 am and drove our happy little 1986 4-cylinder Toyota motorhome to Monterey Bay. There at Kirby Park on Elkhorn Slough I found about fourteen folks unloading bright-colored kayaks and organizing dry bags, binoculars, lunches, and figuring out what clothes to wear. It turned out that t-shirts and shorts were perfect for the warm, clear day.

After warm greetings with friends I've been paddling with for several years, we headed out onto the water. Happy conversations initially echoed across the water as folks got caught up with who's been doing what, but soon we settled into contemplative appreciation of the slough environment.

Elkhorn Slough, about seven miles long, is a tidal estuary on Monterey Bay, and a recognized birding area of international significance. Prior to the mid-18th century the Ohlone Coastal Indians had made their home here. The first Spanish contact was made by members of the Gaspar de Portola expedition, who named it El Estero Grande in 1769. By the second half of the 19th century Moss Landing, at the mouth of the slough, became a steamboat port for loading grain and sugar beets, and salt was harvested from evaporative ponds, or "Salinas". In the early 1900's a whaling station was active for a while, oysters were farmed, and dairying, still an important activity, was established. Hunting clubs also became an important activity. Areas of the slough diked for farmland during that time are now being restored as wildlife habitat.

Birds were scarce during our visit, possibly discouraged by the shotguns that were blasting all around us - the timing of our trip could have been better with regard to hunting seasons. This is certainly not to put down hunting and hunters - it is the licensing and other fees, and the resource work of hunting clubs, that fill a big slice of the resource pie that supports wildlife habitats like this one.

And the shotgun blasts certainly did not discourage the sea otters, who were everywhere, happily engaging in sea otter nooky. Seals (or sea lions) also happily lazed in the sun or followed us around in the water, oblivious to the hunters. 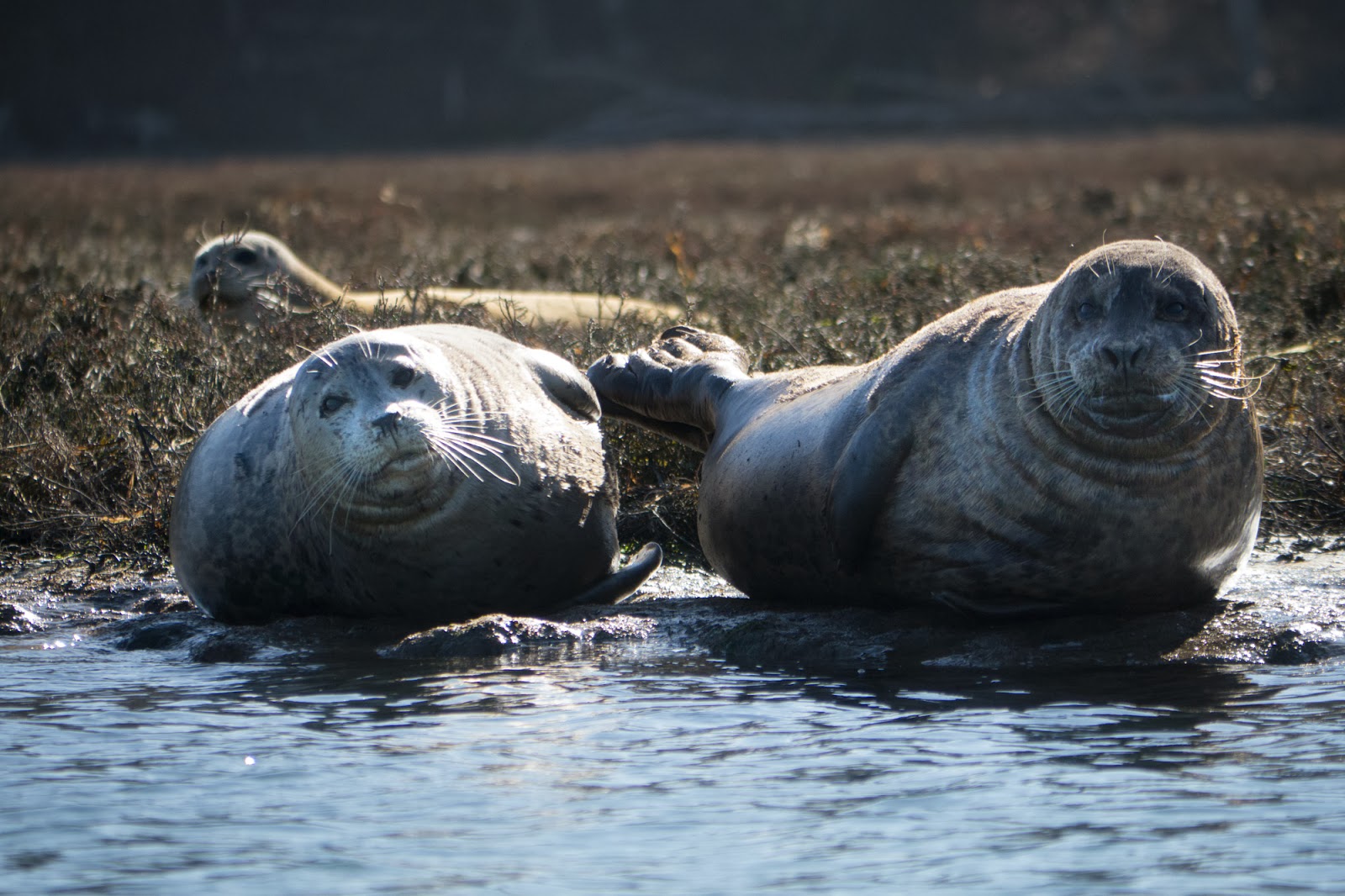 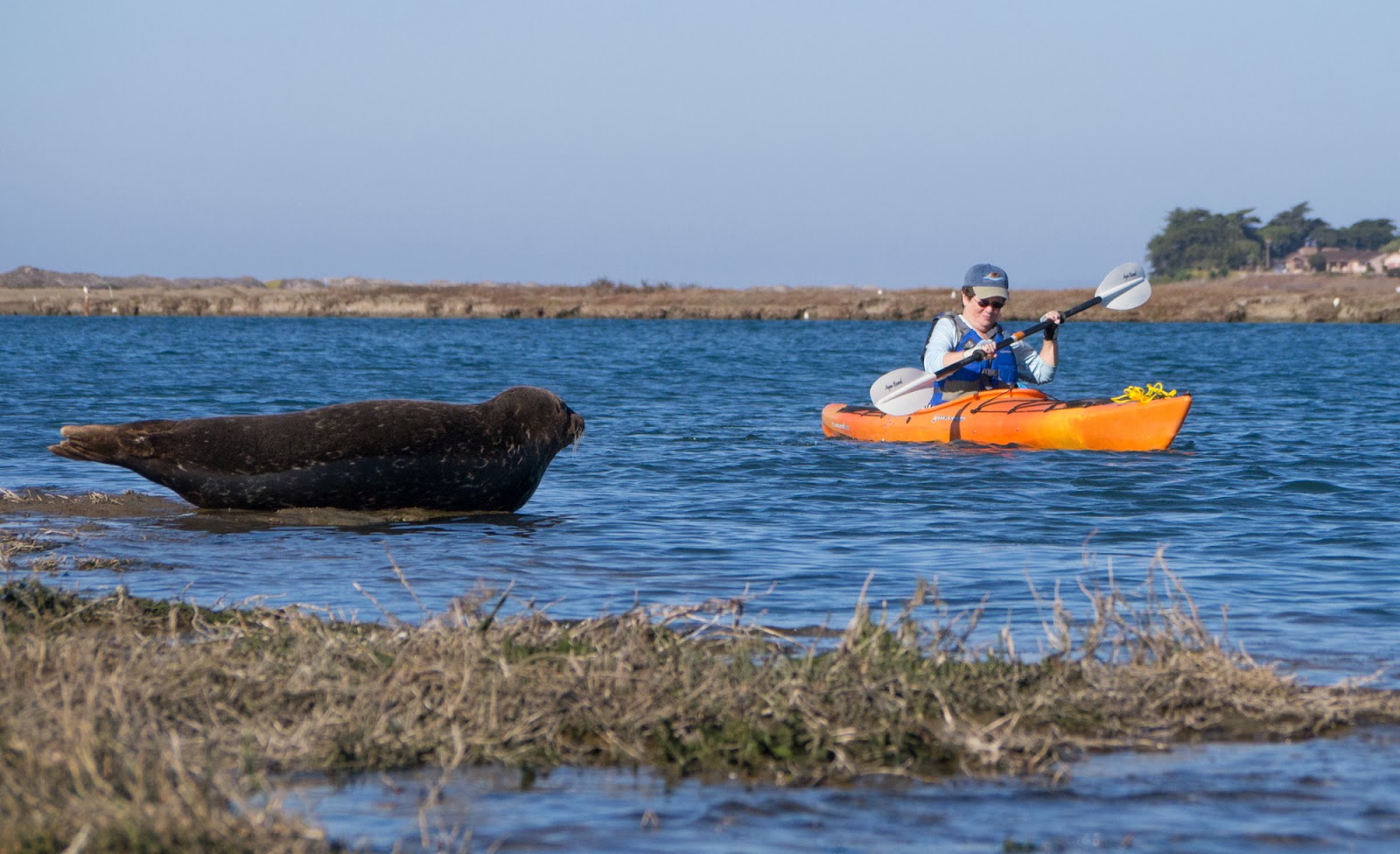 Lake Clementine is a reservoir on the North Fork of the American River near Auburn, California. It was built in 1939 to contain debris released by hydraulic gold mining. "Hydraulicking" as the mining technique was known, made use of water canons to release small amounts of gold from large amounts of ancient river sediments. The huge amounts of debris generated made its way down the rivers to clog irrigation canals and cause river flooding in California's Central Valley, which has been a major agricultural resource since the 1800's. With debris containment its only purpose, Lake Clementine maintains a constant water level, popular with skiers and wake-boarders in the summer, but generally calm and quiet for paddling in the winter.

A Royal Returns to the Family 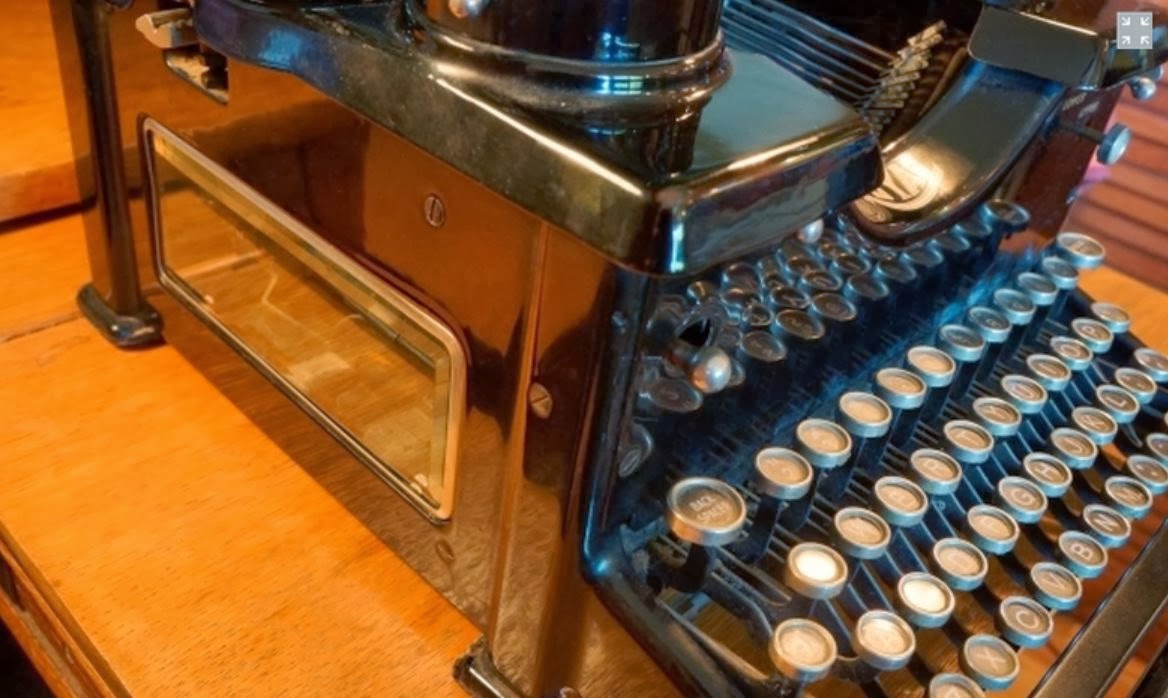 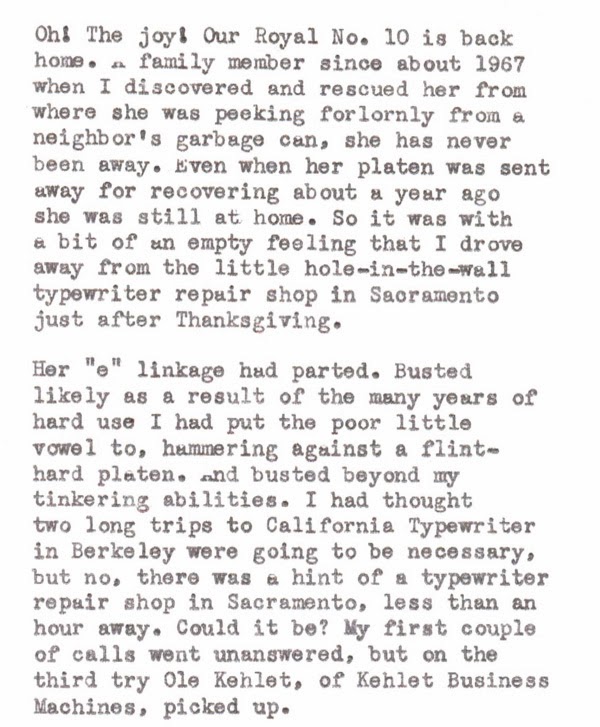 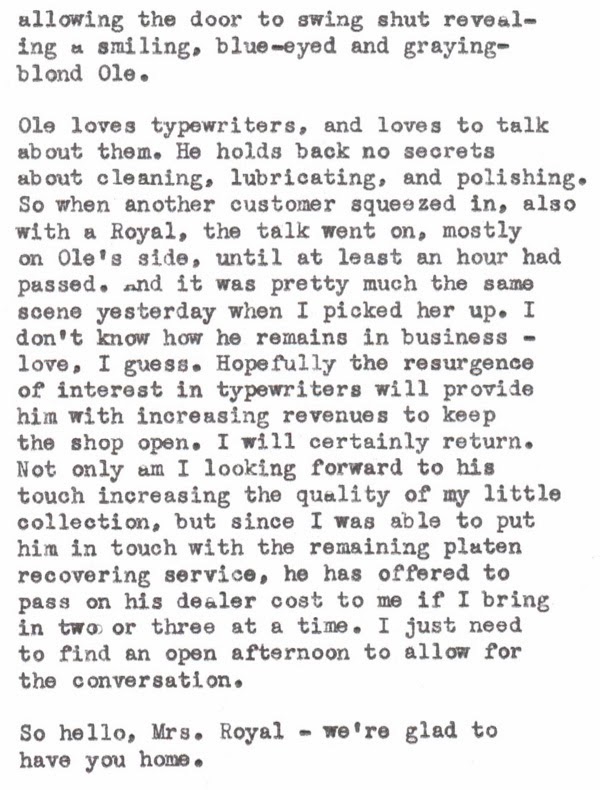 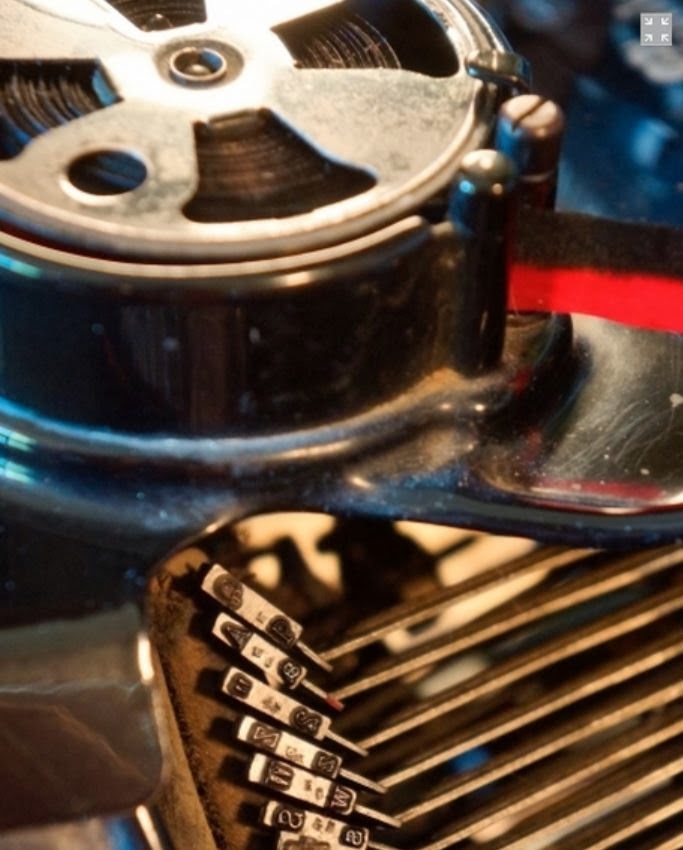 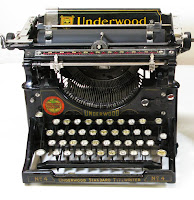 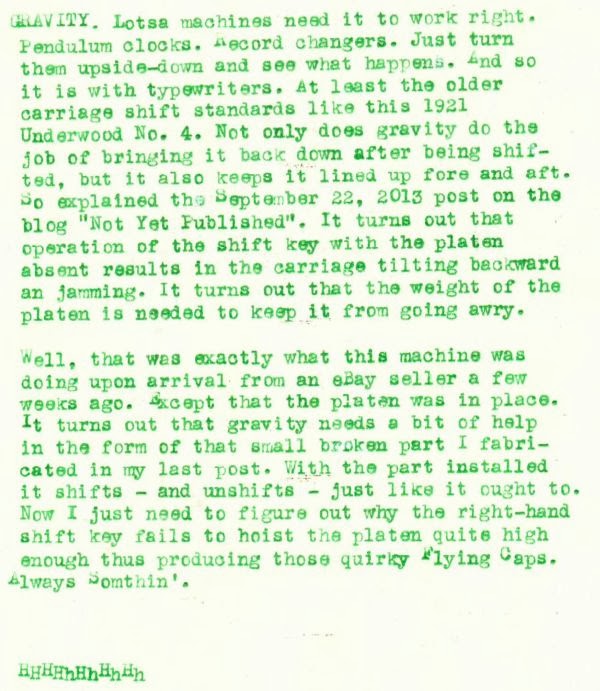 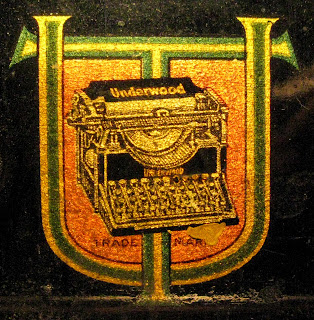 We often quote a comment our granddaughter made on recovering from a blunder: "This is how we learn!".
In that spirit, I would suggest that when dealing with a shellac-finished typer, as this Underwood appears to be, that you be careful with drips when using denatured alcohol (loosening gunk and cleaning the type slugs) or brake fluid (trying to give a bit of tackiness to the flint-hard platen). Or not use them at all. At least test in an out-of-the-way spot. A xylene-based solvent did not appear to affect the finish.

This is how we learn.

I thought a bit of photo forensics might be fun.