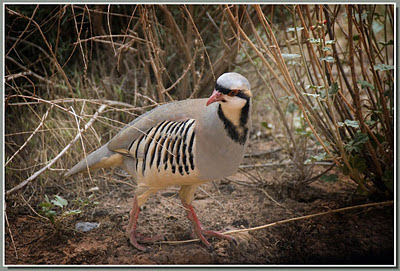 About this photo:
I don't consider myself a wildlife photographer. To me, those are the folks with massive lenses that go trudging off into the wilds with backpacks full of gear, or sit hunched in a blind for days waiting for an opportunity. Not me - too lazy, too impatient. But I do appreciate the beauty and grace of the critters we share this planet with, and over the years have acquired some images of them that please me. The Capitol Gorge Chukar is one of them.

Capitol Gorge is a deep canyon cut into the Waterpocket Fold, a geologic feature made of beds of sandstone, the erosion of which has created the spectacular cliffs and canyons of Capitol Reef National Park.  It was May 2008, and our pickup had acquired a respectable coating of red dust driving the dirt road along the bottom of the gorge. While passing a cutbank on the driver's side I thought I had seen a biggish, plumpish bird pecking around under the brush at its edge. I slowed, stopped, and picked up the camera. Backing up and expecting to see nothing but desert where I had glimpsed the bird, my heart sped up when I saw it was still there. Seeming not to notice me (vehicles make great blinds - see my December 14, 2011, post) it went about its business while I snapped a few shots. As often is the case, it wasn't until later that I realized that for once, I had capitalized on a once-in-a-lifetime opportunity.

A Bit About the Chukar
The Chukar is a partridge whose native range is Eurasia, from Israel and Turkey, through Afghanistan to India. It is the national bird of Pakistan, and in Punjab (a region straddling parts of Pakistan and northern India) is considered a symbol of intense and unrequited love. It has been introduced widely as a gamebird worldwide, including western united States. (Wikipedia link) I've heard from hunters that they can be an exasperatingly difficult bird to hunt.

What Could Have Been Better 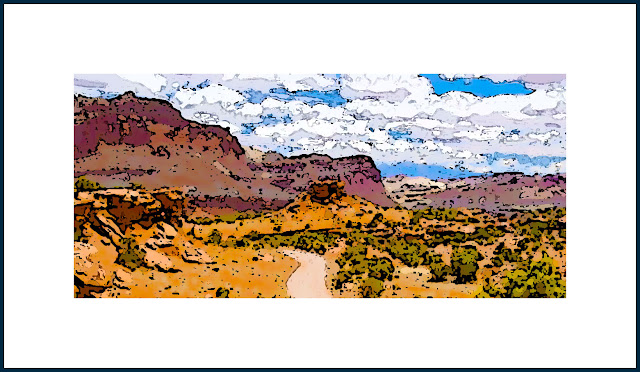 Prints of my images may be obtained via TonysVision.com
Posted by TonysVision at 7:46 PM No comments: