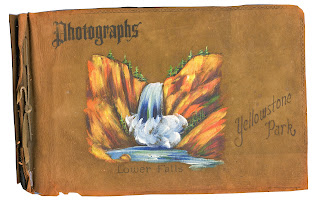 I've always enjoyed restoring vintage photographs. For many years I was the photographer for the Nevada Historical Society, with access to vintage photographs ranging from government surveys in the mid-1800's, to the rise and fall of silver-mining towns, cattle ranching, and the growth of tourism. It was exciting to work with the negatives and prints made from large format cameras, where an enlargement could reveal details from the past never seen before. It was especially pleasing to be able to bring a photograph back to life that had faded almost to invisibility.

The last few days while recuperating from a hospitalization I've been exercising those old skills on some photographs taken in the late 1930's by my father's family. A beautiful album with a hand-painted cover includes some fun snapshots taken during a 1937 road trip that took in Yellowstone Park, the Garden of the Gods in Colorado, and the Jackson Hole Country in Wyoming. 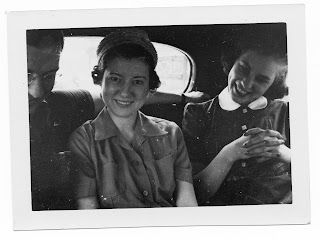 What caught my attention this evening was a little loose print that slipped out: it was dark but looked to include a promising image of my Aunt Helen just before she was married. She is sitting in the back of a car with a girlfriend, both looking very happy. A nice-looking young man with his arm around her looks to be my Uncle Paul. Both long deceased, and in my memory as older people. So it was worth some time to bring Helen out of the shadows, and reveal a young, vibrant woman I'd never seen before.

Posted by TonysVision at 8:11 PM No comments: