Sailing Polywog for the First Time 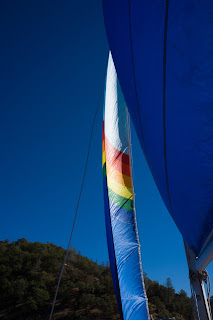 Polywog is a 17-foot, swing-keel trailerable daysailer with a little cuddy and bunks which puts it into the class of small sailboats called “Pocket Cruisers”. Which means something like boats capable of poking around coastal waters and nipping into cozy coves for the night. She arrived in our driveway within about 24 hours of a brain explosion in early August on the order of, "Goddamit, I'm turning 75 and if I'm going to realize the dream of a real sailboat, so if not now when, ask me - huh?!! And anyhow, it's my birthday, so ..."  I was very fortunate in that a Holder 17 was among the two or three boats on Craigs List as I feverishly perused it one night in bed with the laptop. it turns out they are well-made and well-respected boats, with a good online following.

When I went to see it the next day I was surprised at how roomy and comfortable-looking the cockpit was. The boat was in immaculate condition - not a project boat as most that old (built by Hobie in the early 1980's) could most likely be. The owner had purchased her earlier this year with the idea of teaching himself to sail and then going around the world. But he'd recently inherited two other boats, and storage was becoming an issue, thus the Craigs List ad. But in the short time he had her he had polished the decades of oxidation from the nearly immaculate hull, bought a new 6-horse outboard (4-cylcle, reverse gear, and capable of charging an on-board batttery), and made other improvements. I knew she was perfect. I handed him 25 hundred dollar bills and pulled her home that day. She became "Polywog" based on her short and fat build, and as a remembrance of the fun my wife, Hilda, and I have had this spring and summer raising a bevy of polywogs in our fountain.

The first sailing of "Polywog" was a complete success, despite some previous misgivings. Although I had raised the mast and fully rigged the boat once on the driveway, I had concerns about whether I would have the strength and energy to get it rigged and carry out all the other launching chores, and still have something left to enjoy the sail.

Mostly I was hopeful that my wiffe would enjoy the day. To say she was less than fully "on board" with my sudden purchase would be an undersatement. Although I had involved her with things done over the last weeks to improve the boat, and she had shown moments of positive interest, there was an explosion last week on the order of, "You are spending all your time on that boat and taking time away from help I need with things I want to do". So i was kinda sweating out how the day would go, and determined to stay calm, happy, and uncranky as I sorted out the rigging and launching.

We'd planned to leave 11-ish for Lake Englebright, a reservoir built to capture sediment back in the hydraulic gold mining days, now managed by the Corps of Engineers as a recreation lake, and kept brim full year round. We were fortunate with the weather, which has been cooling from the near 100's to the mere mid- to upper-80's. This helped to drop the anxiety meter one notch.

Despite long to-do lists fully checked off, our outings always require time-consuming chores at the last minute, chores which often could have been done earlier, but somehow not thought of until the final throes of preparation. This time it was gassing up the truck, getting some deli sandwiches, icing the ice chest, and hooking up. We left about noon.

It's about an hour and a half to Lake Englebright, on the map about 7 miles NW of Grass Valley. Despite its nearness, somehow we had never explored it, and the turn to the launch ramp, after a long twisty road, came suddenly. Rigging took nearly two hours in the hot afternoon sun, and I was beginning to wonder if it was worth it. And Hilda had apparently disappeared into the truck after at first seeming interested in helping. Uh-oh - I assumed she was sitting there fuming. But it turned out she had spent a long time chasing down a handful of pills which had left her little pillbox, and were making there colorful way rolling and bouncing happily down the ramp toward the lake. Once they were corralled she had to chase down our day-use ticket which had blown from the dashboard in the gusty winds and of course ending up beneath the truck.

Finally we backed her into the water, Hilda following along the pier clinging to a mooring line. We were both excited to see Polywog afloat after her interminable stay on the driveway while we had waited on a window in the calendar between doctor, dentist, personal maintenance, and work issues. Hilda parked the trailer, hit the restroom, and made her way down some steep steps and the ramp while I arranged the boat on the dock for our getaway. There was a moment of panic as I worked her around the dock to a better position when the winds caught her, I made a grab for the deck, and feeling the force of the wind and momentum thought for a moment that I would be stretched further and further between boat and dock, leading to an inevitable dunking. 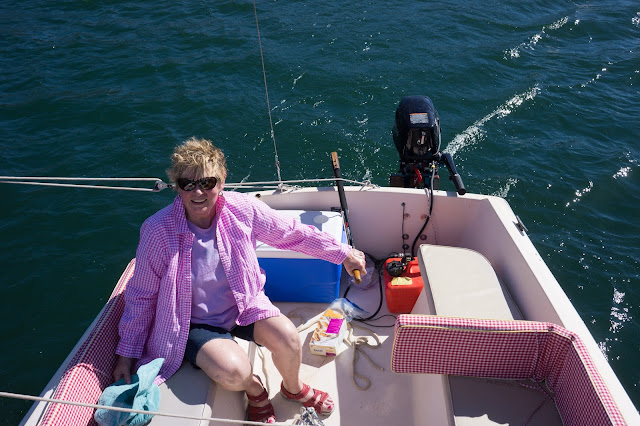 But all went well, Hilda stepped easily aboard, and we were soon motoring out of the marina past a shanty town of a variety of houseboats. With the wind behind us we shut down the motor, raised the main, and soon the joy of the boat began to come over us. Sitting on the comfy bench cushions we poured iced tea and snacked while we slipped past a foothill shoreline of lovely oaks and gray pines. The long, narrow lake has about 200 boat-in only campsites along the shore and tucked away in little coves. At some point we worked out the timing, and realized that if we turned around then we wouldn't be home until 8 pm. And then we kept going, grinning the while. Finally the cliffs closed in and we set the jib, headed back to the marina, and began to learn how to work Polywog to windward. The motor was a huge drag, nearly stalling us on comeabouts, and it took me awhile to figure out how to raise is to catch the notch which would hold it out of the water. Finally It caught, and we sailed on, delaying starting the motor despite the dying breeze, both enjoying the peace of quietly slipping through the water as the sun slipped behind the hills.

Finally the wind died completely and we slowly motored into the marina, drifting up to the pier for a perfect landing, cranked up the keel (some 200 turns on the windlass), got the boat onto the trailer on the second try (the keel needs to slip into a narrow "U" channel). Happy and relaxed, we spent an hour unrigging, watching deer, and noticing the brilliant stars and the milky way. Thank goodness for the launch area lights. We were home and in bed about midnight, happily chatting about the fun day. Now we are looking forward to other outings, Tahoe most likely, and even perhaps the Bay once we learn and get used to Polywogs wiles. And mostly looking forward to sharing her roomy cockpit with kids and grandkids.