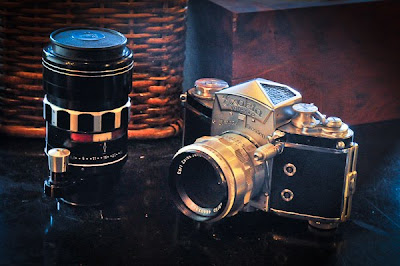 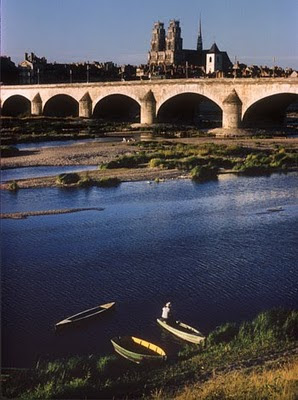 Orleans, France, 1961, a Kodachrome taken with the Exakta
That blog and memories led me to eBay, and a seller in South Africa with a fine looking version of the same model that I had traded away many years ago. Today it arrived, with two solid and precise-feeling German lenses. Everything seems to work smoothly, including the nifty depth-of-field indicator on the Schneider 135mm lens, the unique dual knobs for controlling shutter speed (the slow speed knob must be wound up fer each shot!), the pretty little left-hand operating film advance lever, and the funny shutter release, also left-handed, called for by the semi-automatic diaphragm design. I'm as giddy as a high school boy again, and eager to run some film through it. They do still sell it, don't they?
So what gorgeous hunk of photographic machinery first put stars in your eyes?
Posted by TonysVision at 7:52 PM