We enjoyed a delightful sleep in, cozy after a cool night of bright stars in the Belmont Campground, followed by coffee time and catching up the journal. After breakfast and with Eric at the wheel we drove sedately through Belmont, where we stopped briefly to say hello to Henry who was helping to set up a horseshoe tournament, thank him again for the courthouse tour, and tell him that we had been invited by Ray and Jason to attend a branding at Pine Creek Ranch. Then on over the low pass, where we had trudged a mile and a half yesterday under the threat of rain hoping for help with our flat tire, not only receiving it graciously but an invite to the branding at Pine Creek Ranch as well. Clear blue skies made the orange brick of the Combination Mill stack stand out against the sky and contrast with the purples of the vast valley.

The sedate pace was engendered by our new respect for desert roads which had given us three failed tires in as many days. We were riding on a tire of indeterminate age that had been plugged to staunch yesterday’s leak, three others with thinning tread, and were without a spare. Where previously we hadn't given the graded gravel road much thought, other than to appreciate the lack of washboarding, now we saw the seemingly innocent pebbles popped up by the grader as containing a hidden malevolence.

But we made it safely to Pine Creek Ranch which is approached through green pastures and past a stream of snowmelt from the 12,000 foot peaks of the Toquima Range to the west. Lynn, a sturdy woman of about 50 described what was going on, which I semi-understood as involving collecting the cattle in groups based on owner, then branding, ear tagging or ear marking to distinguish them for the four owners. The brand is the “running W”, identifying the owner of the ranch on which they were grazing. The animals to be marked were 100 or so about eight months old. 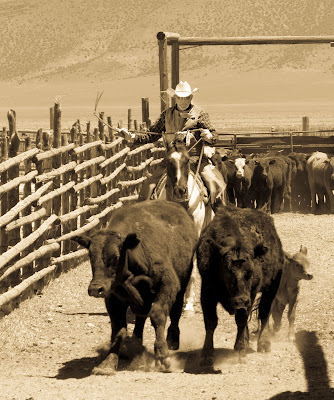 On horseback the men separated the cattle into a complex maze of corrals, then drove them in groups into a long chute leading to a cow trap. Men at the corral leading to the chute herded them in, those stationed along it prodded them along, as the cattle were understandably apprehensive of the bang and clatter of the cow trap, the bawling of the cow being branded, and the smell of singed hide. At the cow trap a large solid steel back door was slammed shut, and a sturdy man in his 30’s who had gone through college on a football scholarship threw his muscle and weight into the two ropes controlling the trap's body squeeze and the neck trap. Ray wielded the branding iron which had been heated in a fire in an old wheelbarrow. Other men, also in their 70’s, helped with positioning and holding the cow still for the operations. In back of the chute, 8-year-old Conner was helped by Lynn with the job of prodding the cows along when necessary with a beat up and weathered chunk of 2X4, and another similar bit of lumber was used to keep them from backing out of the chute. Lynn showed Conner how to hold the piece of wood so that it wouldn’t break his wrist if the cow lunged against it in an unexpected way – though not even quite yearlings, being just 8 months old, they were already up to about 500 pounds.

All of this took place with the background of the Toquima Range, the long long vistas of Monitor Valley, and … but wait, my son Eric has produced a piece of writing as part of a note to a friend that expresses the ambiance of the event far beyond my powers:

By Eric Mindling
The days and experiences of this adventure with my father have been truly good. This time together and the way the world has opened to us have created something that will stay in us until we each die.  Yesterday, for example, we spent hours at a ranch on the edge of a tremendously long valley sided by snow capped mountains and carpeted with sage brush and cattle meadows fed by the surging runoff of melting snow.  The sky was endlessly blue and clear and the air had a bite to it that left my cheeks red and reminded me how tropical my blood is.  We'd been invited out to Pine Creek Ranch by the cowboys who'd fixed our flat the day before. It was branding day and we both watched and photographed somewhat transfixed in this world of  confident, friendly, sturdy handed outdoorsmen wearing worn Carhart jackets and beat leather boots with pretty horses... and the crazy, jumbled work of lining up cattle to brand and ear snip. The animals bellowed and bucked,  hammered against the fences and each other with heaving breath , the air smelled of woodsmoke from the branding iron fire and sizzled hair from the branding proper.  And as they worked in that big open landscape, or spoke to me with an ease and openness akin to that l andscape and no doubt bred by it, or offered a Bud Lite from the cooler in the back of the truck or told the story of building a house with their bare hands it became clear to me that this was a good and healthy way of being human.  As one of the bearded cattlemen said to me, "we’re all cut from different cloth. I like the 40 mile gaze", referring to the vast horizon of open, empty, wild and solitary land that surrounded us on all sides.
== Eric Mindling, May 13, 2017 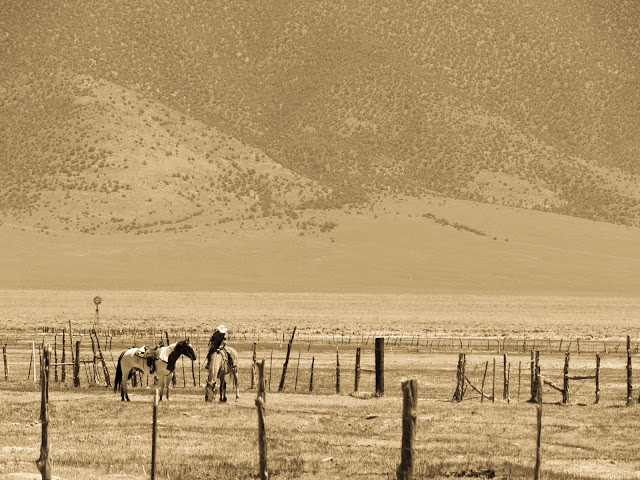 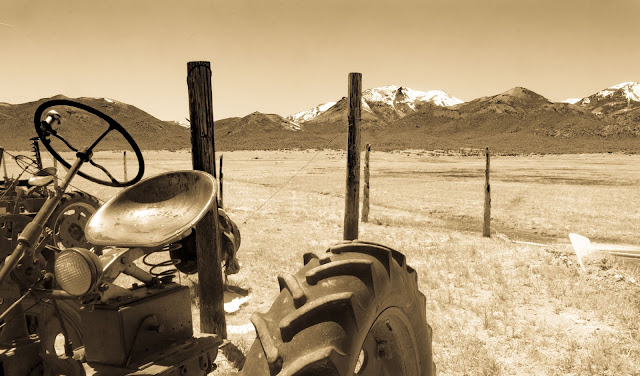 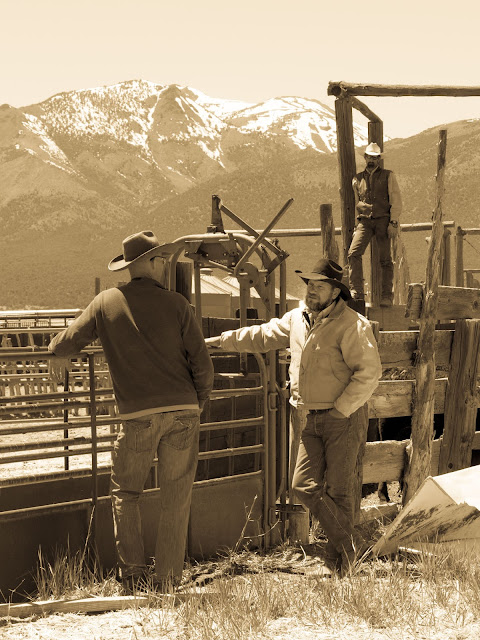 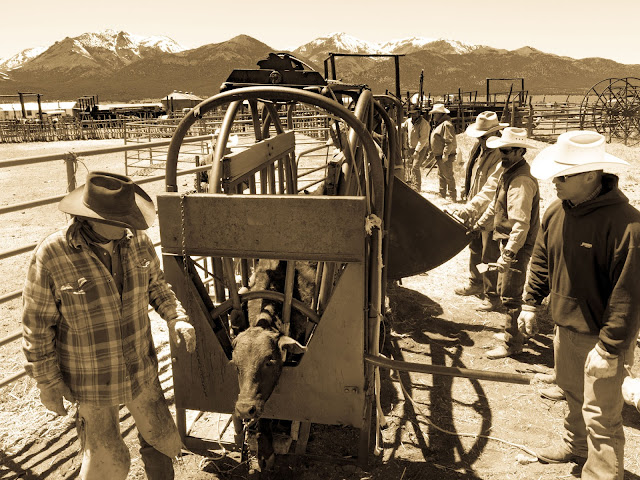 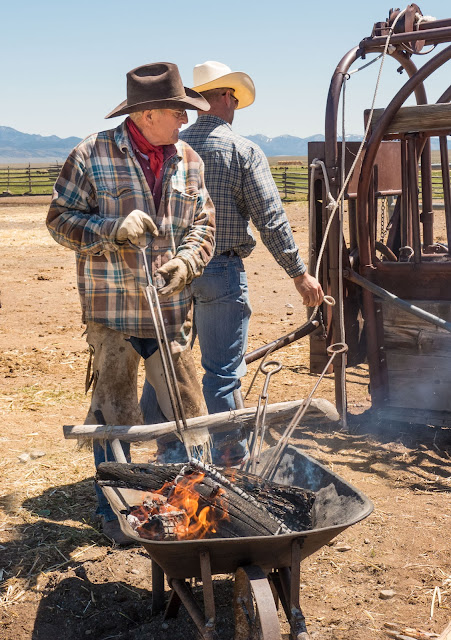 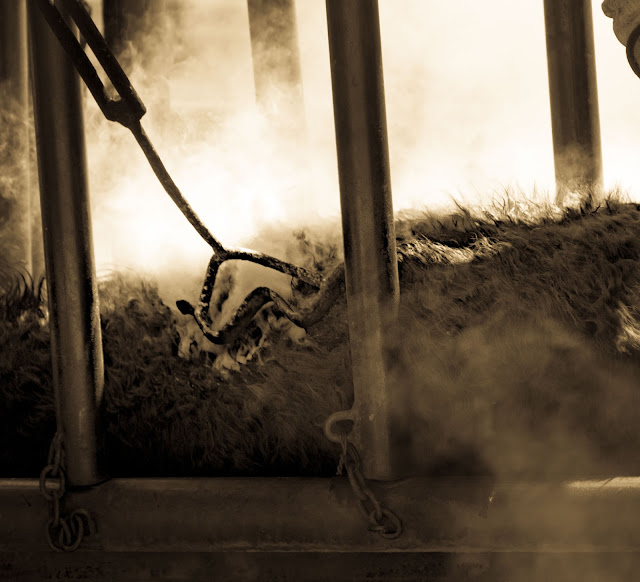 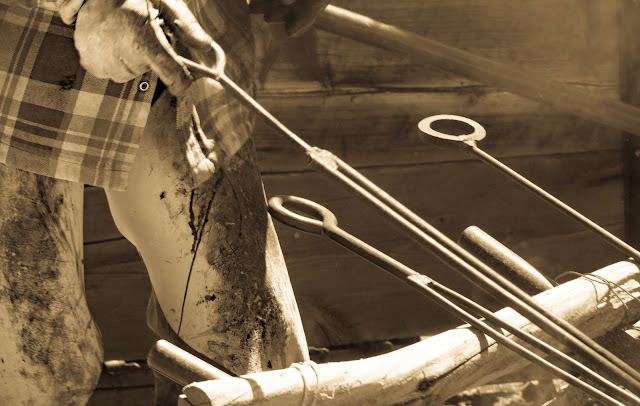 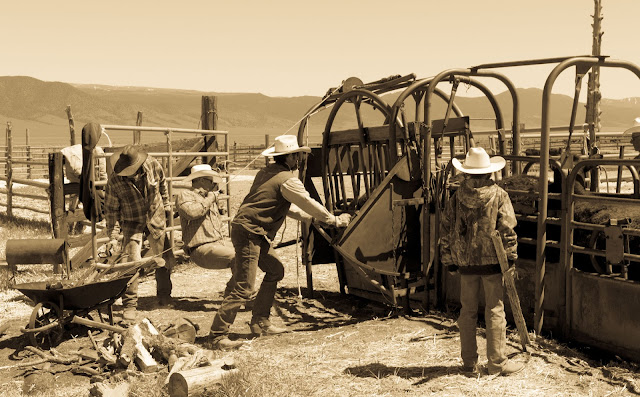 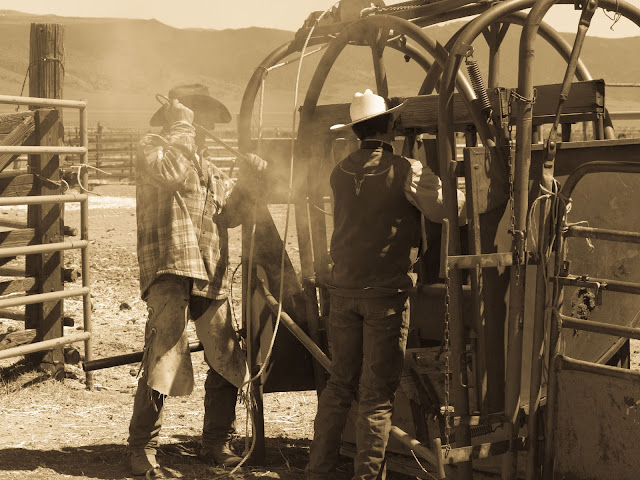 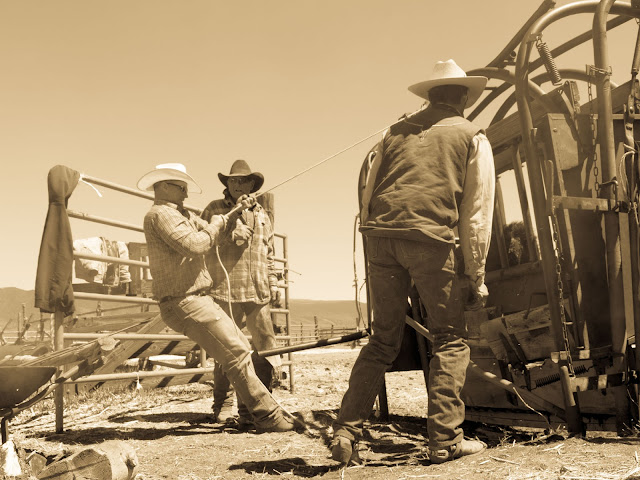 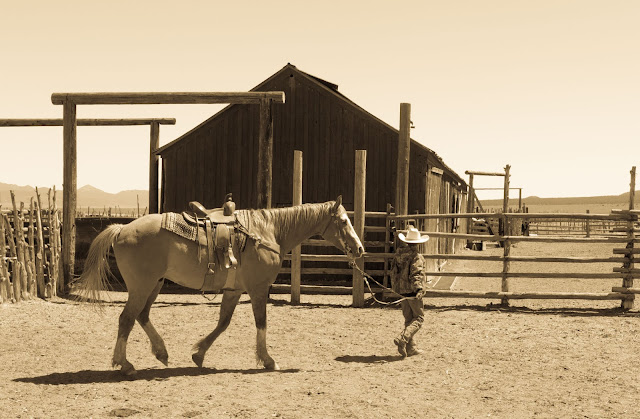 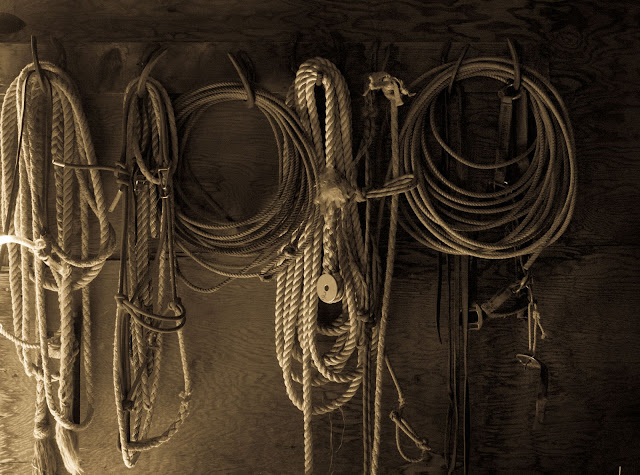 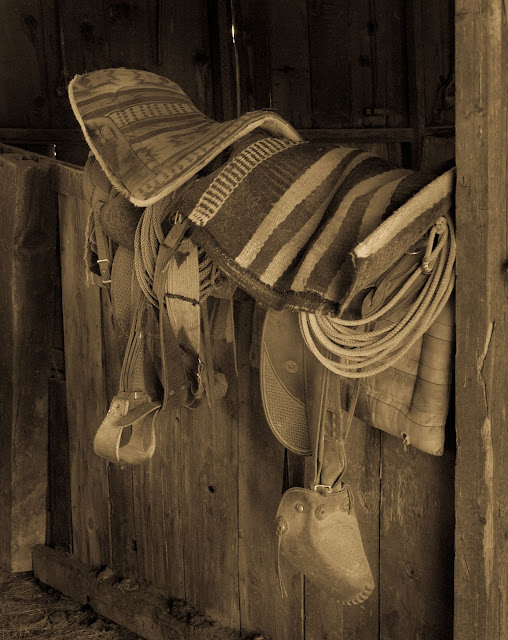 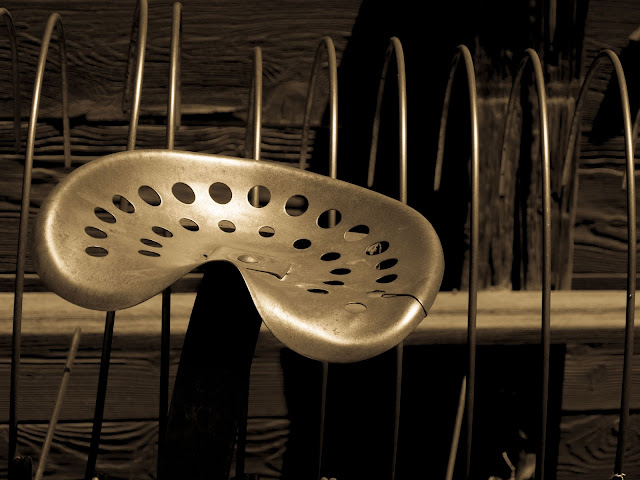