In which we explore a couple of brick mills in Monitor Valley, fail to find White Rock, meet the folks at the Belmont Bar, and learn that it's all about the journey. 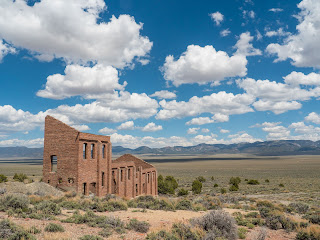 Following our photo tour around Belmont, and our meetup with Puggie who inflated our limp trailer spare tire, we went back to the camp site to install it. Well, Eric installed it while I built us a couple of San Juan tuna fish sandwiches for lunch, off we went in search of “White Rock”. The journey took us past the Combination and Monitor-Belmont mills, where I photographed them for the lovely color of the red brick with the huge blue valley spread out in the background. But I also worked some of the photos into black and white, showing the mills as lonely ghosts. As our search for White Rock took us further south down Monitor Valley we found increasingly sketchy roads, leading us onto some delightful two track and finally to a pair of tracks through crushed sagebrush, producing a distinctive Nevada ambiance. Despite my uncertainty of the trucks abilities, she took us through gulches and up gravelly slopes without hesitation.

Eventually we explored on foot through a deposit of very light-colored volcanic ash within a forest of pinon and juniper trees and sagebrush. A distinctive wild horse pathway led past the area, marked with one truly impressively stacked accumulation of droppings, which were later told was “placed” by a lead horse marking its territory.

The photographic opportunities within the eroded columns and ridges of the white ash were OK, but the real pleasure was mostly in the desert ambiance; the clear fragrant air, long views, and the counterpoints of tiny flowers extending on seemingly delicate stems above a soft cluster of leaves which when touched were found to be as tough and bristly as a hedgehog.

So we retraced our route, stopping again at the mills to take advantage of the late afternoon light. At the base of the tall stack of the Combination Mill I knelt to get a view looking up through the tall opening, I put my had down to brace myself, felt something soft, and gently placed the long-deceased mouse out of the way.

Puggie had invited us to stop by the bar in the evening with our binder of photos, but neither of us being bar types we clomped up on the wooden porch and approached the door with some apprehension. How would a group of tractor hat rednecks react to us camera-toting tourists? We opened the door and entered, expecting to perhaps be barely tolerated or even simply shut out. A couple of hours later we left with the warm feeling of having met some new friends and having even perhaps contributed to their enjoyment of the evening.

The first person we met was Buddy. Actually, Buddy’s wolf dog, Cassie, who at first put on a bit of a show of ferocity, then relaxed into her normal self, accepting an ear scratch then lying at Buddys feet while he paged through the black binder, which was rapidly gaining fame. Buddy is about my age, that is to say, really old. When he saw the photos of the mine structures in Tonopah he explained that he had worked as a contractor making many of the structural improvements to them as they were being stabilized to open to the public. He was especially proud of a tunnel he had developed that provides visitors with an underground view of the 1,000 foot deep open trench which was used to exploit the surface deposits and then just kept on going down.

Henry offered to give us a tour of the courthouse, and then spent a couple of hours with us there a couple of days later. John had stories about the mines and also the ranches in the book, giving me some names of people and places that I scribbled in the margins with a Sharpie borrowed from Bertie, the bartender and Henry’s wife. I recall her as being a bit reserved the first night we met her, but by the time we returned the evening after our visit with Henry to the courthouse she was full of smiles and interest in how the tour had gone, and questions about, "had we seen so-and-so’s name on the wall", and "had we really gone all the way up into the cupola?!" And all because of that book, which I promised to reproduce and send to the bar with even more photos. I’ll be getting after that, just as soon as this obsession with getting down the words documenting our fine road trip peters out.

Before we left the bar I had to take photos of the old glass-cylinder gas pump which had been restored and was on display next to a wonderful old 1800’s painting of a woman lying on a downy bed in a state of considerable disarray. That pump had some meaning to me, as it had saved our butts about 50 years earlier when Jean and I had gone on a tour in our 1951 Plymouth sedan around Monitor Valley. That was back when I’d been “sitting wells”, meaning working long shifts collecting and describing samples as they were being drilled, and then even more interminable shifts doing hydraulic testing, in 1969 and 1970. But I had 48 hours off between shifts, so Jean would come down with Ian, then just about two years old, and I would show her around. This day, after visiting Belmont, Stonehouse and Diana’s Punchbowl, I decided for variety to loop back south on a road along the other side of the valley. All went well until we were within just a couple of miles of the main road when our road plunged through a steeply eroded gully that would have been a challenge for a 4X4 but not even to be considered with our Plymouth sedan. This meant that we had to retrace our route, arriving in Belmont at sundown without enough gas to get ourselves back to the Sundowner Motel in Tonopah. But glowing in the last light as we finally rolled into town was that glass cylinder atop the pump. I had to trot down the hill a bit to knock on the door of the service station’s owner, who came out and filled our tank. I can still recall the relief and pleasure at seeing that precious amber-colored fluid slosh up into the cylinder as the owner worked the hand pump.

At some point Puggie arrived at the bar. Told where we had got to that day, she pulled up some photos on her cell phone of the “real white rock”, a fascinating looking area of volcanic ash that has been wind-eroded into fantastic arches and caves. Eric and I agreed that we had to attempt to find it again. “Just go straight across the valley from the Belmont-Monitor Mill,” she said, “You can’t miss it”. 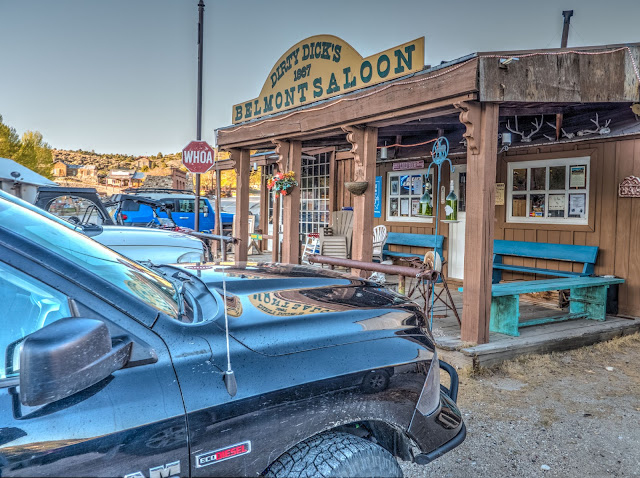 Posted by TonysVision at 9:20 AM