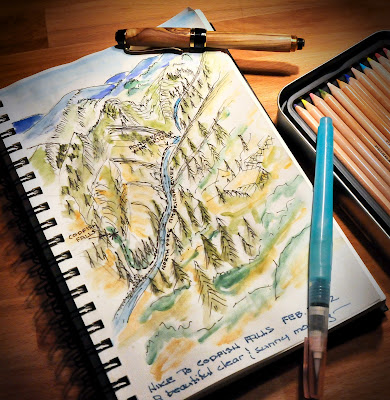 I accessed the trailhead, located where the Ponderosa Way Bridge crosses the North Fork of the American River, by dropping down Ponderosa way from the Foresthill Road between Auburn and Foresthill. You can also zig-zag down Ponderosa way from I-80 near Colfax. Either way you are dealing with switchbacks, dirt roads that are rough in places, and some fine views of the canyon of the North Fork. You would probably make it fine in your Miata, but feel most secure in a high-centered, AWD vehicle.

I crept carefully in our venerable Explorer across the frost-covered wooden planks of the bridge, still in the shade of the deep canyon at 10 AM. The rusty cable railings didn't look like they would help much if we began slipping sideways. The river ran clear and cold below, carving into bedrock strata of seafloor sediments tilted to nearly 90 degrees. A light jacket over my fleece vest felt good as I started down the trail, but as it emerged into sunlight I stopped to stuff it in my daypack. Also in the pack was my Sigma 10-28mm wideangle lens, and around my neck on a comfortable strap was my old Nikon D80, extracted from retirement today to see if its lighter weight compared to the D300 would make it a good hiking camera. Attached to it was my not-quite-do-everything Nikkor 18-200mm VR, with which I have a conflicted relationship. Conflicted, because the designers were unable to figure out how to keep the zoom from slipping to full extension as the camera dangles from the strap. Or when angled downward to frame a photo. A bit of duct tape goes into the pack next trip. In my hand I carried a tiny Velbon tripod. I lust for a carbon fiber, but but have not yet gathered the gumption to spend the required $600.*

Any lustful or negative thoughts regarding photo gear were totally buried by the delight of the trail, which makes its level way downstream on the sunny side of the canyon, always within sight and sound of the river. Casual slip-and-slide side trails make their way down to the river, where sandy beaches and swimming holes would be attractive in the summer.

The morning light spilling down the opposite slope of the canyon outlined the tall Grey Pines in delightful backlighting. Until recently these trees had been know commonly as "Digger Pines", a name applied with reference to the Nissenan, or Southern Maidu, by the gold miners of the 1800's, based on their observation that they commonly dug up roots for food and other uses. The miners also left behind piles of cobbles on a bar along the opposite bank, washed clean by hydraulic mining. The resulting sediment carried down the American, and other rivers, into the Central Valley built up there, causing flooding and damaging agricultural land. A temporary solution on the NF was to build the Clementine Dam downstream a few miles, solely for the purpose of trapping the sediment before it could be carried further downstream. Shortly thereafter the release of sediment was outlawed by the nation's first environmental legislation.

What with several photo stops it took me about 45 minutes to walk about a mile to the point where the canyon could be seen through the trees to open up into a side canyon, cut by Codfish Creek. About here, as the trail began to turn into the side canyon, a shallow, overgrown canal could be seen paralleling the trail. It was likely used by gold seekers to carry water from Codfish Creek for the hydraulic mining.


Walking into the tributary canyon the rush of the river fades and is replaced by the gurgle of Codfish Creek, and soon the cascading flow of the falls can be seen through the trees. I stumbled around on the rocks a bit taking photographs of the falls and the fern and moss-lined grottoes just downstream. My legs were a bit shaky after spending about an hour crouching here and there behind the camera, so I bypassed the trail heading a bit further to the top off the falls - I'll return there with grandchildren to complete the exploration in the spring.

Not far back down the trail I came upon a dad with three young daughters and a Shi-Tzu heading toward the falls. The scene took me back to our days in Susanville, when the kids were in high school and we often made treks like that.

So I'm going to try to kidnap some grandchildren for another trip to Codfish Falls, this time all the way to the top. But we'll do it no later than April, as this will be a warm trail later in the summer. But then, there are those inviting side trails down to swimming holes carved in the rocks by the river.

Back in the Explorer, and a bit disappointed that I'd missed Science Friday I headed out of the canyon continuing on Ponderosa Way which switchbacks its way in fairly spectacular fashion back to pavement, scattered homes, and finally I-80. Joining the rush of traffic, I still carried some shreds of the relaxation I had felt on the trail and while photographing Codfish Creek, and reflected on how easy it is to access places like that once you let your feet carry you away from roadways.

*At home I checked the weight of a $40 aluminum Sunpak tripod I picked up once for travelling. Turns out it is lighter than a Gitzo Mountaineer carbon fiber with head. $600 saved.

Posted by TonysVision at 6:58 AM